World Refugee Day: More than 100 Million People Out of Their Homes

Russia’s aggression on Ukraine has caused the biggest refugee crisis in Europe since the end of World War II, and on World Refugee Day, June 20, the United Nations reminds all those fleeing persecution and war and as such have the right to asylum. Today, more than 100 million people are forcibly displaced around the world, from Afghanistan, Syria, Yemen and Myanmar to Venezuela or Burkina Faso.

The United Nations warns that the situation could worsen due to the upcoming food supply crisis caused by the Russian aggression on Ukraine. The EU remains the world’s leading donor, helping affected populations access to food, shelter, education, health care, life support and other basic needs. We must not forget that more than 80% of the world’s refugees are housed in developing countries.

On the occasion of the World Refugee Day, Serbian Ambassador to the EU Emanuele Giaufret emphasised that since February 24, when Russia started an unjustified and unprovoked war against Ukraine, more than seven million Ukrainians have fled to EU countries.

“As Europeans, we have an obligation to show solidarity and help refugees seeking protection. Serbia and its citizens have traditionally been welcoming and sympathetic towards the refugees, which we strongly value. We also appreciate all positive steps the Serbian authorities undertook towards the refugees from Ukraine”, stated Giaufret and reminded that almost three and a half million Ukrainians received the status of temporary protection in the member states of the European Union, and thus accommodation, health care, social assistance, access to the labor market, and education. He also praised Serbia for having extended the same level of protection.

In Serbia, according to the Commissariat for Refugees and Migration, there are about 7,000 refugees from Ukraine and most are in private accommodation, while a small part, 68 of them, are housed in the Asylum Center in Vranje, which is one of two centres designated for reception of Ukrainian refugees.

Since the outbreak of the refugee crisis in 2015, the European Union has helped Serbia with more than 130 million euros. In addition to helping to improve the conditions of accommodation and reception of refugees, the EU has enabled refugees to have better access to health care, the education system and social protection. 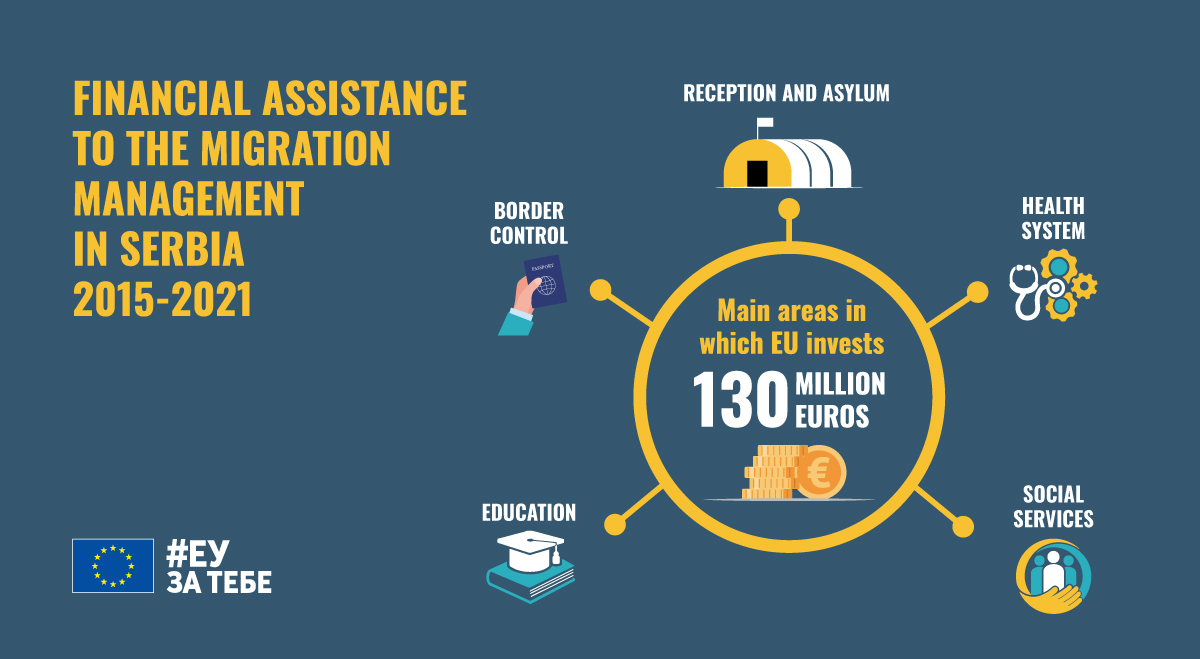 Besides the adequate care in reception centres and asylum centres, the EU has also contributed to providing sufficient clothing, footwear, food, water and other foodstuffs for refugees in all centres. In addition, thanks to EU support, Serbia managed to provide refugees with access to all health services and medicines, and during the corona virus pandemic, it was among the first countries to provide vaccines for refugees.

When it comes to the education sector, the EU has helped to provide education for its children, and educational materials have been produced in the mother tongues of refugees. Dozens of educational and other contents for educators were conducted in order to train them to work with refugees and contribute to their better integration into the educational system.

Furthermore, the European Union, together with the Border Police and other state institutions, has worked to improve control and surveillance at border crossings, all with the aim of preventing human trafficking and smuggling. The European Union will continue to cooperate with Serbian institutions in the field of migration and provide the necessary support in the process of Serbia’s accession to the EU.

Priorities in the coming period remain effective border control and improving the conditions in which refugees live in Serbia.