Vrnjačka Banja, 7 June 2021 – To ensure adequate prevention and be better prepared for effective response in case of disasters, 18 cities and municipalities in the West Morava basin, which is particularly prone to the risk of floods, earthquakes and landslides, signed the Agreement on inter-municipal cooperation today.

With the Agreement, these local self-government units also established the Joint Service for civil protection affairs, which will coordinate prevention measures and the early warning and response system on the territory of the entire basin, inhabited by 800,000 people. The seat of the Joint Service for civil protection affairs will be in Kruševac, within the local self-government, and its work will be funded by all municipalities in the West Morava basin.

The signing of the Agreement on inter-municipal cooperation and the establishment of the Joint Service for civil protection affairs were supported by the Delegation of the European Union to Serbia, the Ministry of Interior, the Ministry of Public Administration and Local Self-Government, the Ministry of European Integration, the Public Investment Management Office, the Standing Conference of Towns and Municipalities and the United Nations Development Programme (UNDP) in Serbia. 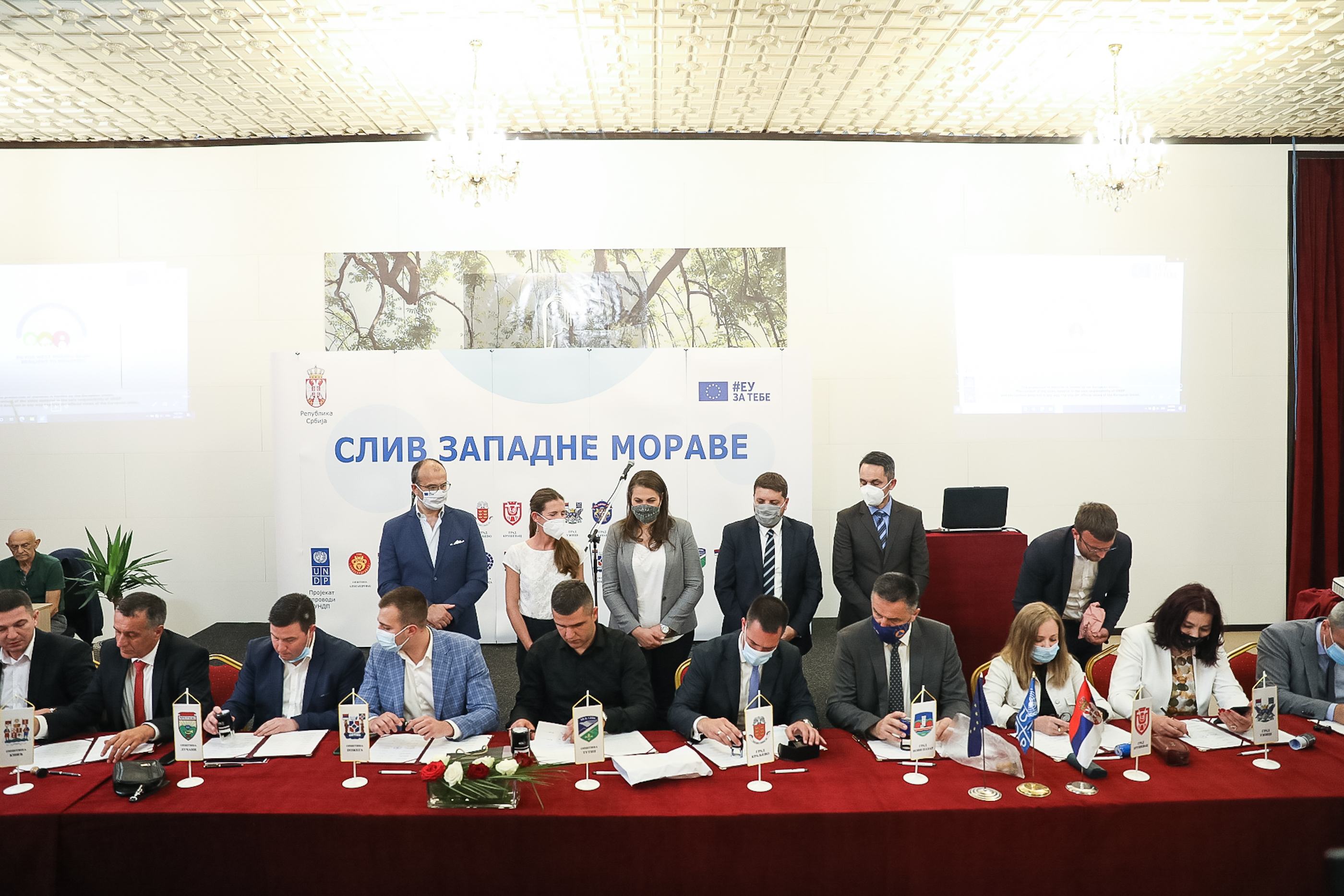 “I am proud of European solidarity and consistent support to Serbia for managing and preventing natural disasters, including the pandemic,” pointed out H.E. Mr Sem Fabrizi, Head of Delegation of the European Union (EU) to Serbia, adding:

“Together with Serbia, we ensured that the state is able to respond to and recover from the risk of floods and other disasters. Since 2014, the EU has donated more than 170 million euros just for flood recovery and prevention. We also helped with an additional 66 million euros of donations during the ongoing health crisis in the best possible way: either by transporting medical and protective equipment, by purchasing it, or even by funding the employment of Serbian medical staff in public institutions across the country. No matter what the emergency is and when it happens – the EU is here to help Serbia and its people. I am proud that we are joining forces today with 18 municipalities in order to support stronger coordination and prevention in emergencies in the West Morava basin”, said Ambassador Fabrizi. 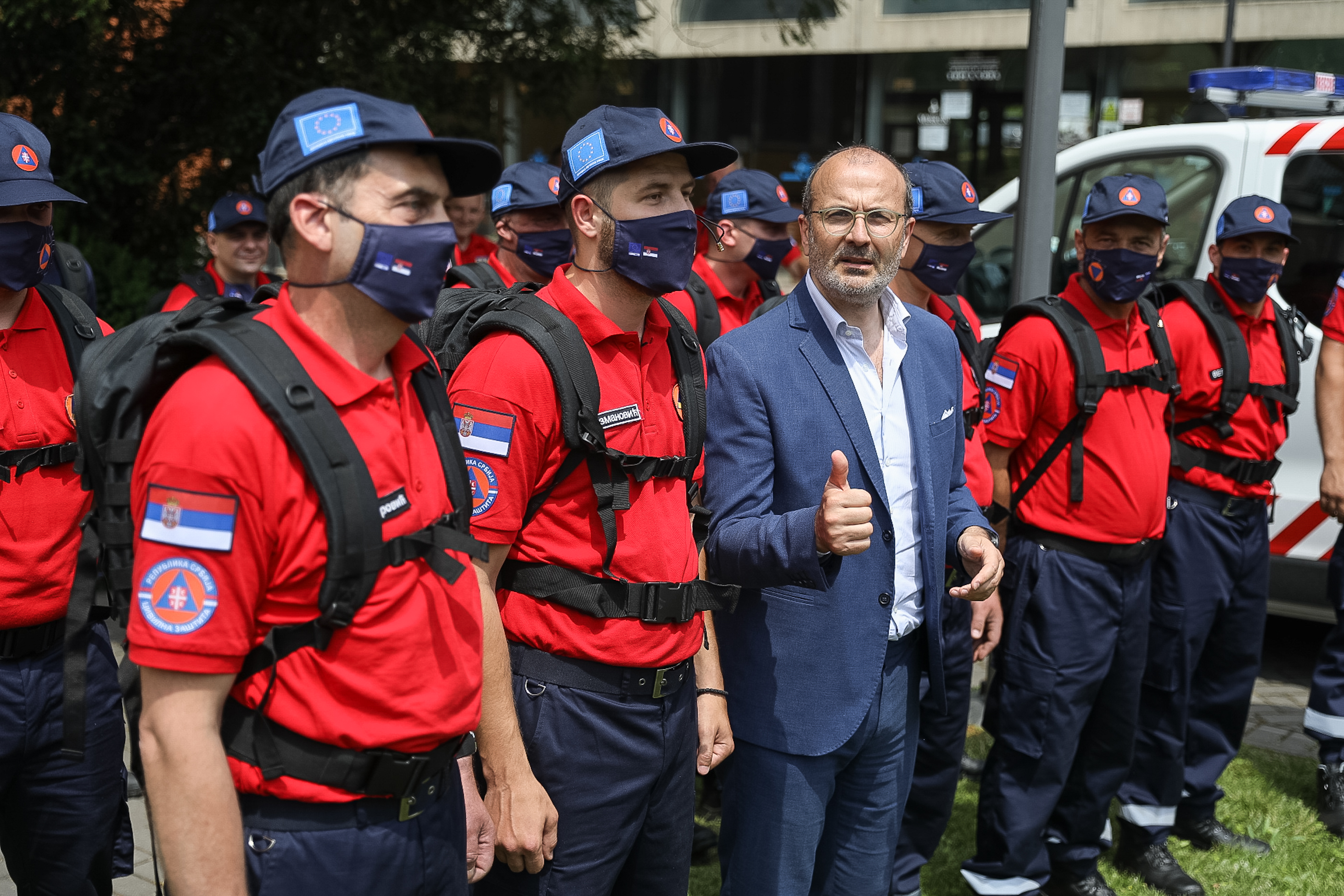 “During crises, UNDP is always present on the ground, providing support to citizens and local authorities for faster and easier coping with emergencies. Additionally, in cooperation with the Government of the Republic of Serbia and in partnership with the European Union, we are helping national and local institutions to better prepare for possible challenges, so they can provide a timely response and increase their preparedness for future crises and disasters. I hope that we will soon see many more initiatives throughout Serbia like the one here in the West Morava basin, which can serve as an example to other local communities”, said Ms Francine Pickup, UNDP Resident Representative in Serbia. 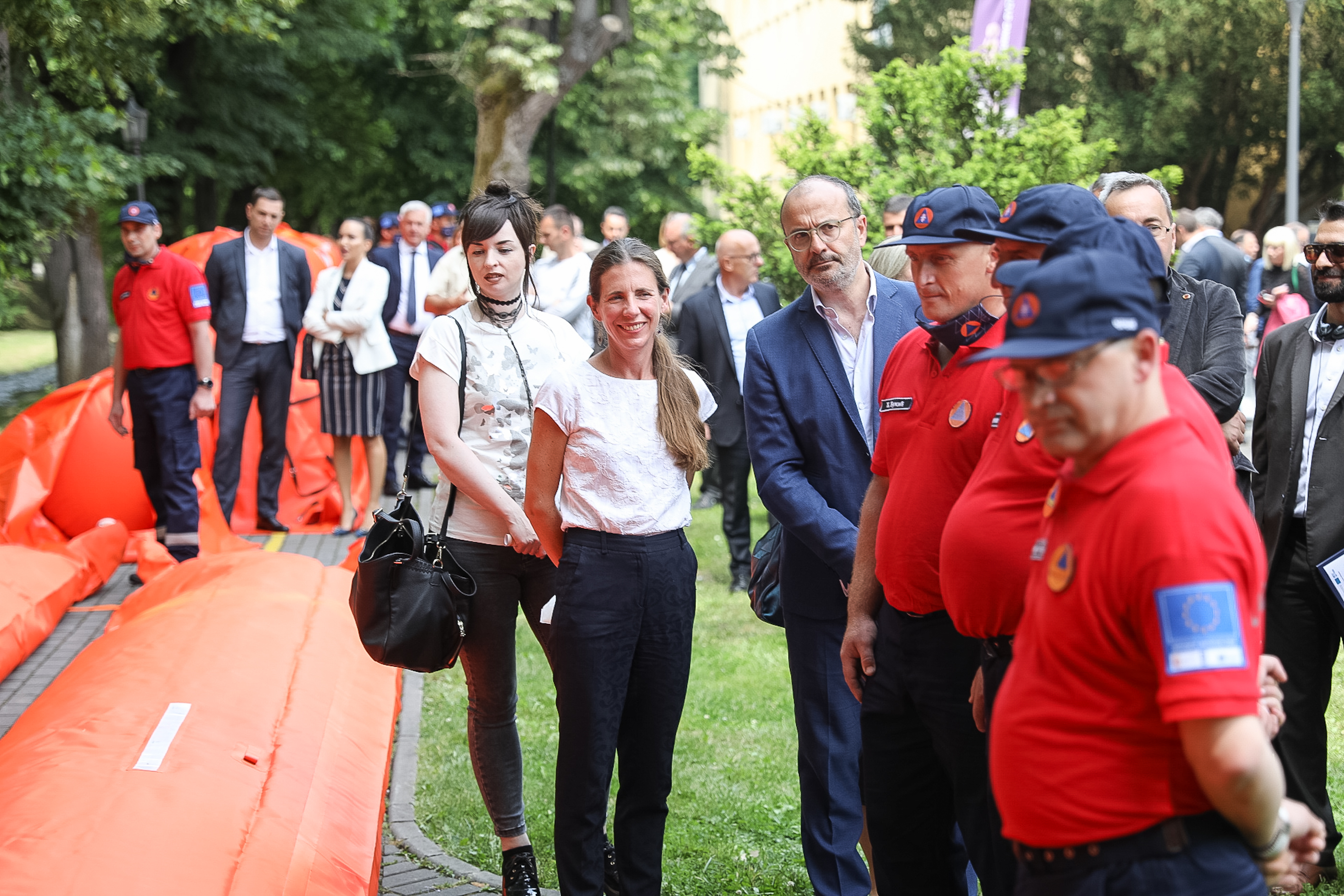 Director of the Public Investment Management Office, Mr Marko Blagojević, pointed out: “The joint action of municipalities and cities to reduce the risk of disasters represents a great step forward from the previous practice. Teamwork, joint funding and coordinated action of local self-government units are the most efficient way to protect the lives and property of people and reduce the consequences of natural and other disasters to an acceptable minimum. To make our communities and infrastructure more resilient to all future disasters, the Public Investment Management Office is implementing all investments and reconstruction programmes in cooperation with local self-governments, recognizing the risks in the local context and preventing possible consequences through state-of-the-art technological and architectural solutions. By investing in people, equipment and infrastructure, in the synergy at the national and local levels, we are building a society capable of resisting numerous disasters and the spirit of unity.”

“Local self-governments are the most important link in the timely response to emergencies, because they are first to be hit and must be first to respond to protect the citizens. The Ministry of Public Administration and Local Self-Government supported the signing of the agreement between 18 local self-governments in the West Morava basin to join and start cooperation for early detection and easier management of crises caused by natural disasters”, added Maja Mačužić Puzić, State Secretary in the Ministry of Public Administration and Local Self-Government.

“For SCTM as an organisation representing a home for all towns and municipalities, the idea of their cooperation is the central field of action. Intermunicipal cooperation for us is one of the key mechanisms in improving the work and functioning of a local self-government and raising the quality of meeting the needs of citizens and economy. Our organisation will continue providing full support, both to the West Morava Basin and the Joint Service which will be established today, and to the realisation of already initiated process of associating local authorities within other basins in the Republic of Serbia, but also in developing cross border cooperation between towns and municipalities on common hazards – cause risks of natural disasters know no boundaries,” said Nikola Tarbuk, Deputy Secretary General of the Standing Conference of Towns and Municipalities.

The ceremonial signing of the Agreement on inter-municipal cooperation was followed by a joint exercise of the civil protection units of the West Morava basin and the Mountain Rescue Service (MRS). The project “EU for Serbia Resilient to Disasters”, implemented by UNDP, envisages the procurement of equipment and vehicles for civil protection units and the MRS, equipping the training centre and organizing training sessions. The total value of this donation from the European Union is 1.2 million euros.

Thanks to the support of the European Union, civil protection units have already received 900 sets of uniforms and 600 meters of triple portable flood defense dams for response to emergencies, with a total value of around 550,000 euros. 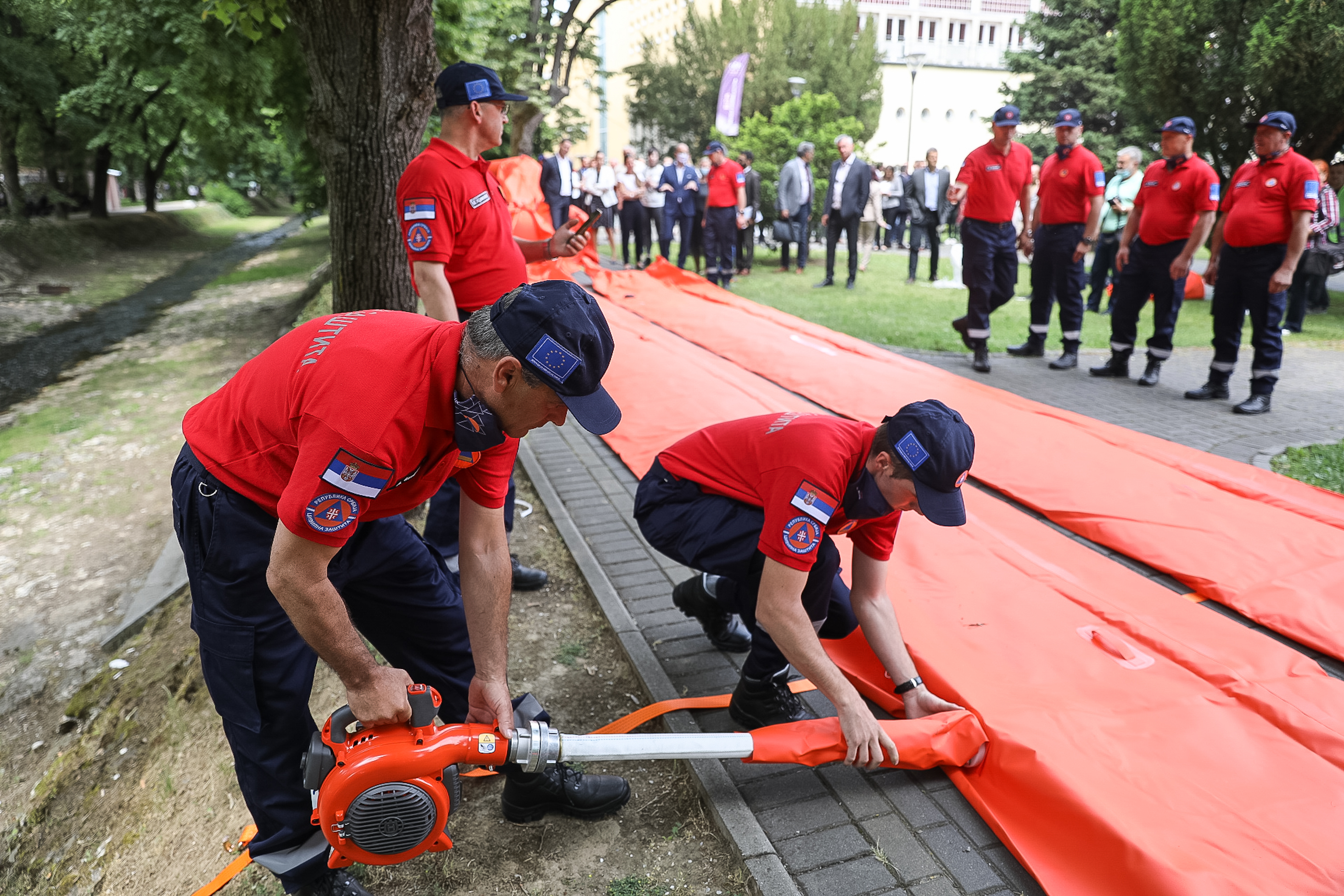 At the beginning of next year, in partnership with the City of Kraljevo, UNDP will start the construction and equipping of the Training Centre for the training of general-purpose civil protection units, which will be located on Rudno. The European Union allocated 600,000 euros for this purpose.

The Mountain Rescue Service (MRS) has also received new vehicles, uniforms and equipment from the EU, which will enable rescuers to be efficient even in hard-to-reach terrain. Two off-road vehicles, a 9-seater minibus, snowmobiles, as well as telecommunication equipment, stretchers, climbing safety equipment and rescue uniforms were provided to the MRS. This EU donation is worth 200,000 euros. In the second half of this year, specialized training will be organized for members of the Mountain Rescue Service in accordance with European standards. 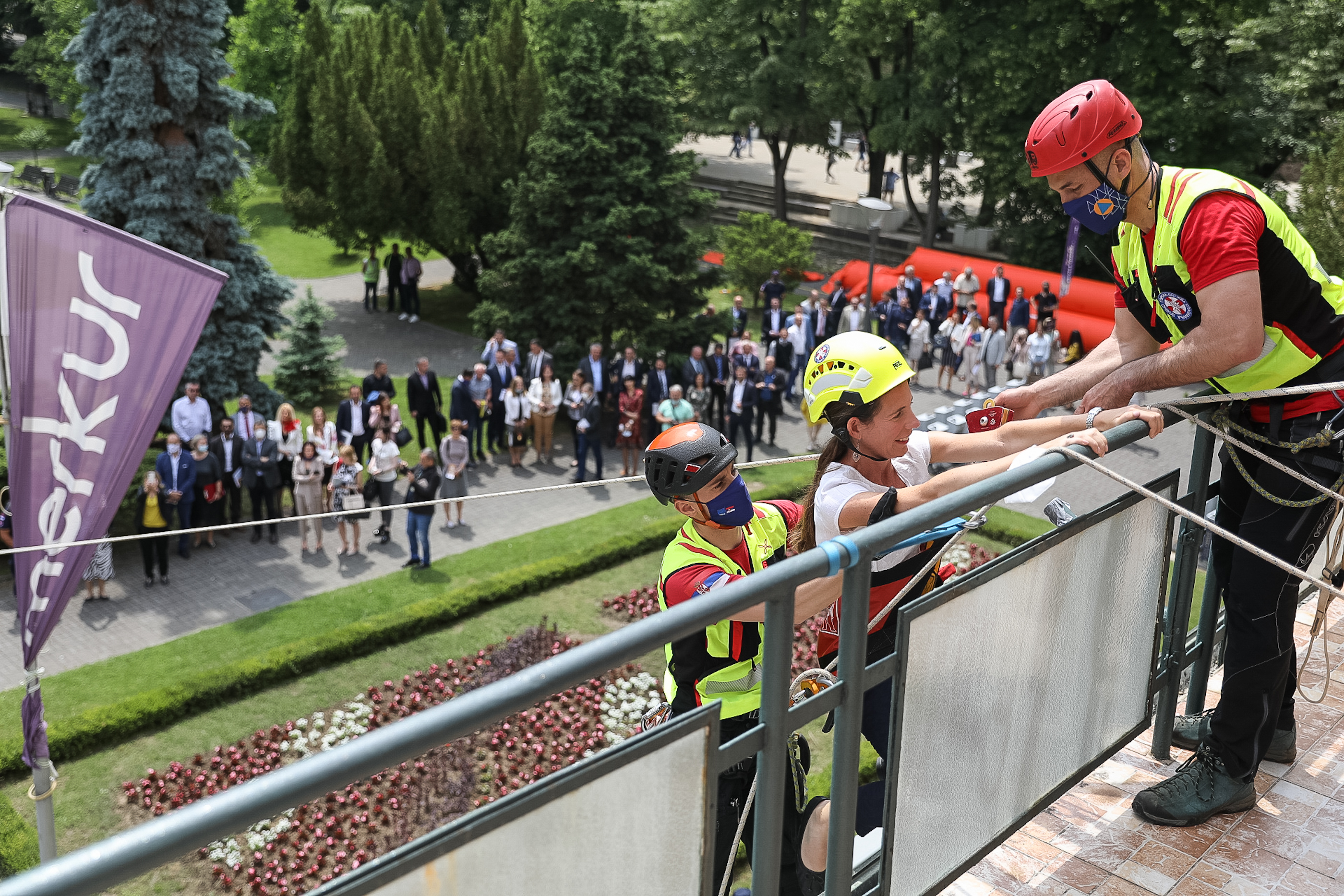 EU for Serbia Resilient to Disasters