Monitoring, surveillance and reporting are of a key importance for effective tobacco control, it was stressed at a tobacco control workshop organized by the PLAC III project. The workshop was held within the scope of assistance provided by the project to the Tobacco Administration of the Ministry of Finance in harmonising the legislation in this area with the Union acquis. The workshop also addressed the practical aspects and challenges in the implementation of the harmonised legislation.

According to the European Commission report, part related to the Chapter 28 (Consumer and Health Protection), the Law on Tobacco of the Republic of Serbia is partially aligned with the Directive2014/40/EU which regulates tobacco and tobacco products, but the use of tobacco in public places is not aligned with EU standards.

At a workshop held on April 20, project expert Vesna Kerstin Petrič presented an overview of the situation in the EU: smoking is the number one cause of premature death in the EU, which annually loses 5% of its GDP to the health consequences of smoking. Although progress has been made in the fight against tobacco use, 27% of the EU population smokes. So far, 19 EU countries have banned smoking in enclosed public spaces. The focus of the Directive is on tobacco products, flavour additives that encourage smoking, but also on efforts to monitor the sale of banned goods as much as possible.

Through the PLAC III project, an analysis of the alignment of national legislation with the Union acquis was made. According to Kerstin Petrič, it is necessary to regulate indoor smoking, introduce quit lines to help with smoking cessation and regulate the advertising, because there is no obligation yet that packages of tobacco products must contain photographs illustrating harmful effects of smoking. She stressed the importance of monitoring and reporting to international organisations, as well as of carefully prepared public campaigns. Kerstin Petrič presented in detail the strategy recommended by the World Health Organisation for the fight against the global epidemic of tobacco use.

The use of electronic cigarettes, which also fall under the scope of the Directive, was also discussed at the workshop. The WHO's position is that e-cigarettes are harmful to health, while a study conducted among EU Member States showed that their use inhibits rather than assists smoking cessation.

In the discussion, it was noted that e-cigarettes are not part of the Law on Tobacco Use and that they should be covered by the future law on tobacco control that is planned.

Expert Uliana Bakh spoke about herbal smoking products that are becoming more common on the market and are harmful to health because the consumer inhales harmful toxic and carcinogenic substances. In the set of recommendations, Bakh specifically mentioned raising public awareness in order to prevent the promotion of these products as products that ease smoking cessation. 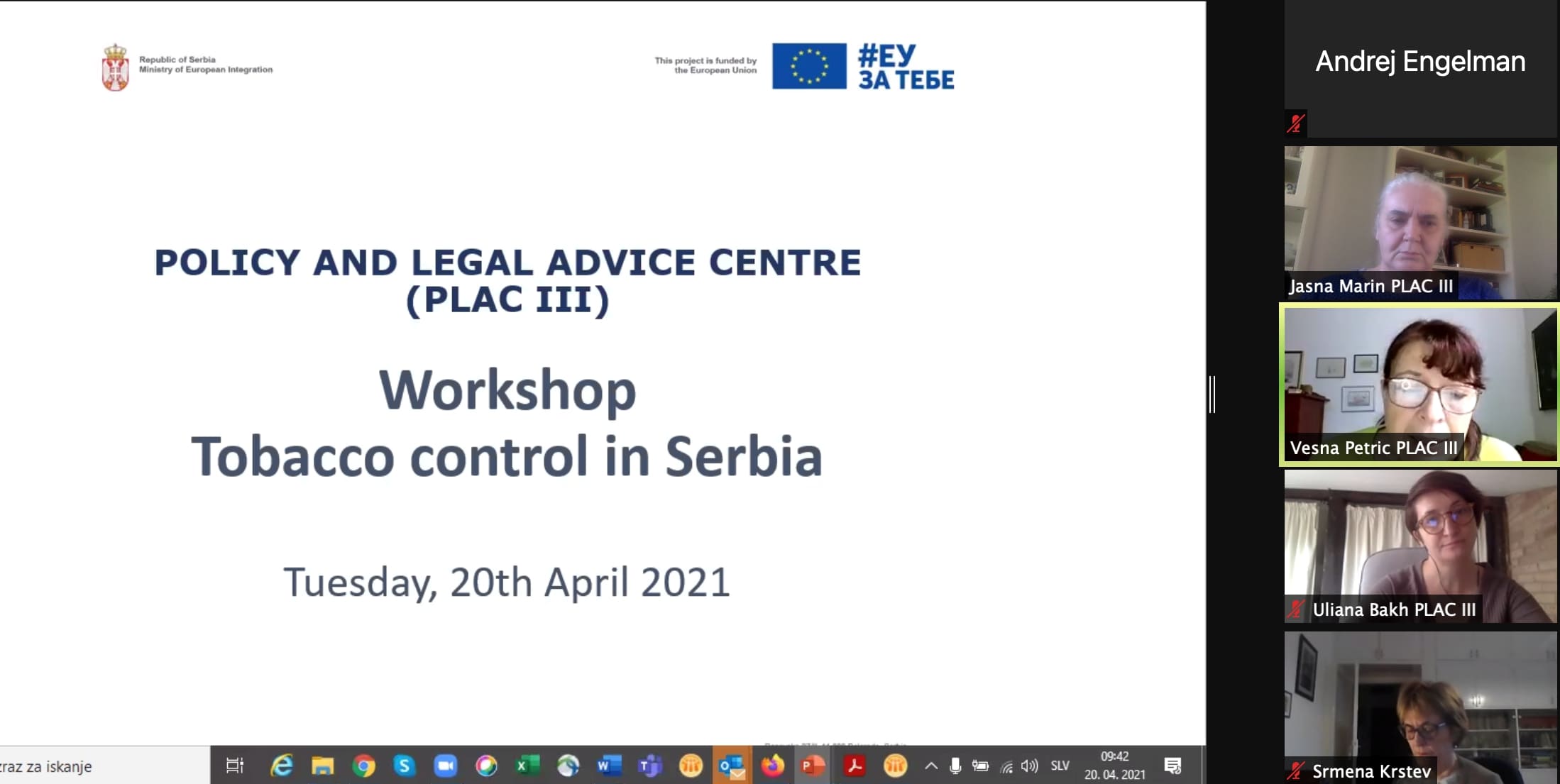